Celebrating their 25th Anniversary year in true Mediaeval Baebes style; the classical chart-topping choir will be weaving its story-telling magic once again this Christmas. Traditionally a time for reflection and celebration; tickets for this remarkable evening of music, dance and theatre, on Monday 20th December at St Mary’s Church in Horsham, are now on sale.

Accompanied by a dazzling array of exotic and period instruments; carols, traditional folksongs, and innovative settings of ancient and romantic poetry will be revealed in a spirited performance of beguiling choral music. For this Silver Jubilee celebration, the band will premiere compositions from their latest album of ethereal plainsong ‘Prayers of the Rosary’, alongside exciting new arrangements of Christmas favourites.

When a group of friends broke into a graveyard 25 years ago to sing mediæval songs and make merry; no one could have predicted the epic journey they were embarking on. Over a quarter of a century later, the Mediaeval Baebes have released 10 studio albums and won an Ivor Novella Award for their performance on the BBC serialization ‘The Virgin Queen.’ They have also received 2 Emmy nominations, and a Royal Television Society award alongside composer Martin Phipps, for their soundtrack to ITV’s hit period drama, ‘Victoria.’

Established as one of the most successful female-led, early music and folk ensembles in Europe; their lush, ethereal harmonies will transport the listener through a myriad of ancient and forgotten languages.

Come join the Mediaeval Baebes, as they enchant and uplift their audiences once again with a glorious Christmas time celebration. Tickets are now available from www.mediaevalbaebes.com at a cost of £25 each.

The Mediaeval Baebes are:

About the Mediaeval Baebes

The Mediaeval Baebes exquisite storybook opened its pages in 1996, when a group of friends broke into a North London cemetery and sang together, clad in flowing white gowns and crowns of ivy.

The unique, classical chart topping choir Mediaeval Baebes was conceptualised and formed in 1996 by musical director, composer and producer Katharine Blake. The group have released 8 studio albums, won an Ivor Novella Award for their performance on the BBC serialisation “The Virgin Queen” and received two Emmy nominations and a Royal Television Society award as the featured artist alongside composer Martin Phipps for the theme tune of ITV’s hit TV show “Victoria”.

Throughout their many incarnations, the Mediaeval Baebes’ haunting classical vocals have led them to tour the world, including UK, United States, Canada, Asia and Europe, in venues ranging from castles and caves to cathedrals & Glastonbury. They have toured with Jools Holland and played at the Royal Albert Hall, Carnglaze Caverns in Cornwall, Jersey Opera House, Tewkesbury Abbey, supported Michael Flatley in Hyde Park, and performed at the legendary Lilith Fayre.

Most recently they were invited by enthusiast Iggy Pop to perform on his Radio 6 Christmas Day special.

Katharine Blake is known for her unique choral writing style, sourcing lyrics from mediaeval and romantic texts which she sets to original scores, as well as reinventing traditional and folk songs, often accompanied by the Mediaeval Baebes’ plethora of mediaeval and folk instruments. Whilst singing in an array of obscure and ancient languages, the Baebes offer a beguiling musical beauty and ethereal talent. The choice of mediaeval texts are mythological, philosophical and dark in topic, meditating upon the inevitability of death, the pointlessness of material possessions, the agony of unrequited love or the dangers of vinous hallucinations. The more familiar material, such as their classic anthology of Christmas Carols “Of Kings and Angels” offers a refreshing and exotic twist to well-known classics

2019 saw the release of the group’s ground breaking and fantastical nursery rhyme album, which celebrates the contrast of child-like innocence with the surreal and dark content inherent in these ancient rhymes. To mark this long-awaited release, the Baebes are be embarking on a Christmas UK tour, where they will be performing material from this album alongside many seasonal favorites 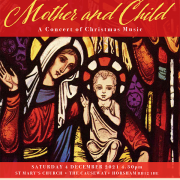 We are delighted to Welcome the Horsham Chamber Choir back to St Mary’s for an afternoon concert of reflective music for Christmas, with audience carols and warming mulled wine.

As part of the launch of Horsham Music Circle’s 80th Season we are delighted to be asked to host a concert by the Fontanella recorder ensemble in their UK tour. This remarkable recorder ensemble features four of the UK’s leading players – Rebecca Austen-Brown, Louise Bradbury, Sarah Humphrys and Annabel Knight. The group have been praised by the critics for ‘the quality of their ensemble playing … like a bit of magic’ . Equally at home with specialist early music audiences, music clubs and festivals and in the recording studio, Fontanella has performed across Britain and Europe, including special festival appearances in Italy, Iceland and Finland and concerts in all corners of the UK. The individual members of the ensemble also all have diverse and busy performing careers.

They appear on Sunday 19th September with their programme ‘The Delightful Companion’. Fontanella entertains audiences of all ages in programmes designed to bring the history of the recorder to life. The programme paints a colourful landscape of musical life in post-Restoration England! Performed on an array of instruments from the tiny garklein to the great sub-contra bass. This concert is Supported by a grant from the Continuo Foundation. There will be two 1 hour performances at 4.30pm and 7.00pm at the Causeway Barn.

Audience attendance will be limited to between 40-50 per concert dependent on household booking numbers. PLEASE BOOK IN ADVANCE (No tickets on sale at the door) by phone 01403 252602 (answer machine), email horshammusiccircle@gmail.com, or online at wegottickets.com/HorshamMusicCircle.