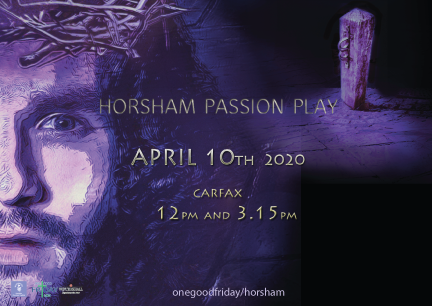 Following advice given at the government’s briefing on Monday 16 March 2020 in relation to Coronavirus (COVID-19), it is with regret that we have decided to postpone the One Good Friday 2020 – Horsham Passion Play due to have been performed twice in Horsham town centre on Good Friday (Friday 10th April).

The contribution of the Horsham Passion Play cast, supporters, suppliers and Horsham District Council is acknowledged. Everyone has been working tirelessly to prepare for the performances. The project has demonstrated a considerable show of unity across churches and a strong community effort to achieve something quite amazing.

Rehearsals have been underway twice weekly since the beginning of the year. Other Passion Play locations (Havant and Tonbridge, and the Passion Trust) have been tremendously generous, lending costumes and props for the production. Other costumes and props have been made by willing volunteers and partners such as Men in Sheds. Big Church Day Out was also partnering with the event by providing music on the Carfax Bandstand.

Sarah Holloway, Director, One Good Friday 2020 – Horsham Passion Play said: “When I began this journey almost a year ago. There were just the two of us: Rosemary and I. In December 2019, it looked as if the project couldn’t continue, as we had no income, few cast members, and a lack of manpower to make it happen. At the same time God led me to visit the half size Noah’s Ark docked at Ipswich. He spoke about giving us the blueprint for the vision of the project, as with Noah building the ark, and that He would bring all the animals i.e. cast and resources that we needed.
Within the following weeks that’s exactly what happened, resulting in over 100 volunteers pulling together, including over 60 cast members from sixteen local churches and the wider community. It is a vision of unity that we’ve carried since the beginning to deliver a message of hope. With or without the performance, this is what we continue to do.”

Rosemary Couchman, Producer, One Good Friday 2020 – Horsham Passion Play said: “It has been a privilege and a pleasure to work with Wintershall and other locations to prepare for the Horsham Passion Play performances. Our cast and crew have been spectacular in their dedication to this project, and our supporters have demonstrated extreme generosity in getting us to this stage. This has been more than a play – more of a journey really. Truly inspirational!”

Although it is disappointing that the Horsham Passion Play will not be able to take place on Good Friday 2020, it is hoped that there will be the opportunity to perform it at some point in the future.

The One Good Friday 2020 – Horsham Passion Play was being performed under license from Wintershall. Good Friday, 10 April 2020, was to have seen the Passion Play performed again in London, and across other UK locations, including two performances in Horsham’s Carfax with a local cast.

The Passion Play’s Christian message embraces all denominations but is also for those of different faiths or none. It is both educational and historical, and an opportunity to tell the real story of Easter to a whole new audience.

Any queries, please contact Producer, Rosemary Couchman at horsham@onegoodfriday.com or 07566 202741.

Want to join the discussion?
Feel free to contribute!